If you need catering for your event whether it is corporate or special events, we have you covered at the PAO Cafe. We have our Filipino food available in trays. In addition, if you have other needs for your event feel free to inquire and we can provide a wide-variety of cuisines. A half-tray serves 10-12 people with a full tray serving 20-25 people. Call 813-443-4855 to place your order or ask us questions. 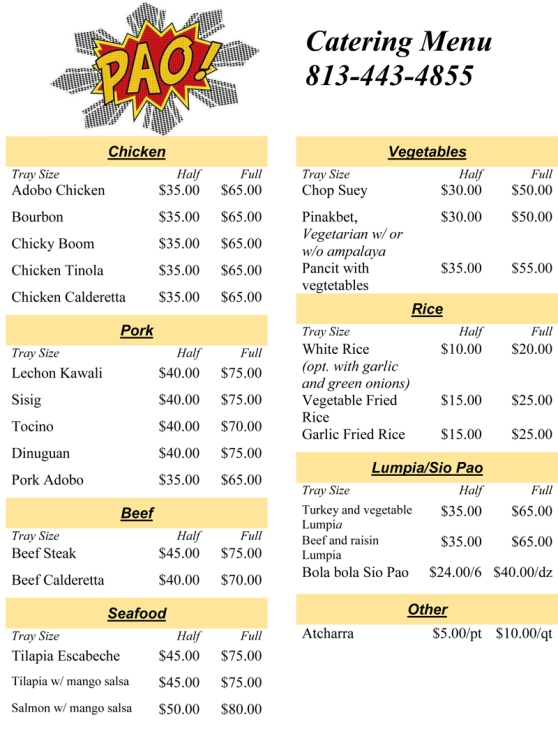 Come down to PAO Cafe and celebrate Halloween with our Dinuguan special ($8.99). This dish featured cubes of pork in a tangy pork blood stew, a vampire favorite, and is served with white rice. This dish is also known as Filipino chocolate meat due to its chocolate-like color and consistency.

Tracing the origin of Dinuguan in Filipino-cuisine is a task, but some stories claim that the tendency for Filipinos to waste no part of the food they eat (pig blood in this case) helped inspire the creation of Dinuguan as a dish in Philippine cuisine.

The term Dinuguan comes from the Filipino word dugo meaning “blood”. Although often thought to be quite foreign, Dinuguan is not too different than European-style blood sausage or British black pudding with the main difference between vinegar and peppers. A similar dish is melas zomos (black soup) which is an ancient Spartan dish.